Something to post at your Congress member's social media pages.

Sent to Rep. Mondaire Jones (D) (NY-17) via Facebook post.
Please feel free to post the same to the Facebook and other social media pages of your Congressional representatives.
You and the entire membership of both houses are racing to throw another $40 Billion for FIVE MORE MONTHS of a war with Russia that you hope will extend it so long that it causes either a degradation of their military or even, in your wildest delusion, regime change.
This is after you gave $13.6 Billion just this year.
Meanwhile, this is enough money for an entire year of HUD's budget.
Or of the SNAP program - in fact, ALL food aid for a year.
Or health insurance for FOUR MILLION Americans.
Or enough to fund 400 school districts for a year.
Or college tuition for ONE MILLION students for a year.
How's the water in Flint? The housing in Chicago? Hunger in Newburgh, NY or Camden, NJ?
You dare pretend to be a progressive?
You are actually tempting nuclear war rather than feed, clothe, house or provide medical care for the people of this country.
(I personally added this:)
Hypocrite. Liar. Psychopath.
Did I leave anything out?
Posted by Don DeBar at 6:33 PM

The admission this past week by a number of members of the US Congress that the US is, in fact, currently in a war warrants a response. So we seek to force Congress to impeach President Joseph Biden if he refuses to stop the hostilities.
We need you to send a note to the Member of the House of Representatives in your district. Apparently, the 435 Members only accept notes from people who live in their district.
You can find your district here:
Please send a note like this to your Congressional Representative after filling in the other required fields in the Congress member's web page e-form:

"I would like to discuss the situation in Ukraine, in particular the fact that a number of members of both houses have told the media that we are at war with Russia and that they intend for the US to win that war.

"Given that there has been no announcement of a declaration of war, nor the passage of an AUMF for such a war, nor approval of the UNSC for military action against Russia, I would like to make some suggestions regarding remedies as afforded by the US Constitution and international law, the former of which, at a minimum, you have sworn to uphold.

"Given the urgent and perhaps existential nature of the current situation, I would like to have this conversation immediately."

The point of the meeting - or the follow-up email if you get a non-responsive reply like I got - is to get them to introduce this Bill of Impeachment:

That President Biden has committed a series of non-neutral and belligerent acts against the Russian Federation without the express authorization of the United States Congress in violation of the War Powers Clause of the US. Constitution, Congress’s own 1973 War Powers Resolution, and the 1907 Hague Convention on Neutrality during Land Warfare to which the United States is a contracting power and is thus “the Supreme Law of the Land” under Article VI of the United States Constitution. The Russian Federation and Ukraine are also contracting parties to this 1907 Hague Convention.

Please copy me into your note when you send it, and send me a copy of their reply when you receive it. And please be sure to include the name of the Representative and the district number and state when you do, so I can place this info on our "big board" for planning our next move.

If above links don't work for you, send your note and the reply to dondebar@gmail.com
Posted by Don DeBar at 9:01 AM 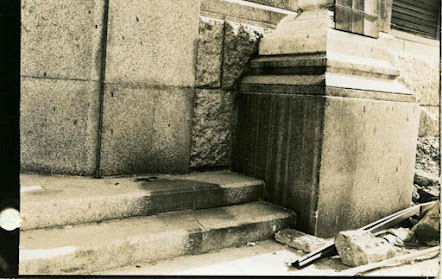 That was one person, from one atomic bomb in one city.
The US government - Biden, Congress, Langley and the Pentagon - is at war with Russia, as was admitted by at least 7 different members of Congress this past week. Russia has thousands of warheads, reliable delivery systems and the collective memory of almost 30 million casualties the last time an enemy military was placed where NATO is now placed.
I think you need to evaluate what abortion rights mean in the context of nuclear war. And get busy dealing with the real problem.
If not, please go away and leave me alone. You are either part of the problem, or part of the solution, and this is especially true in matters of an existential nature.

From: reply@workingfamilies.org To: dondebar@optonline.net Sent: Saturday, May 7, 2022 1:05 PM Subject: The day I got my abortion